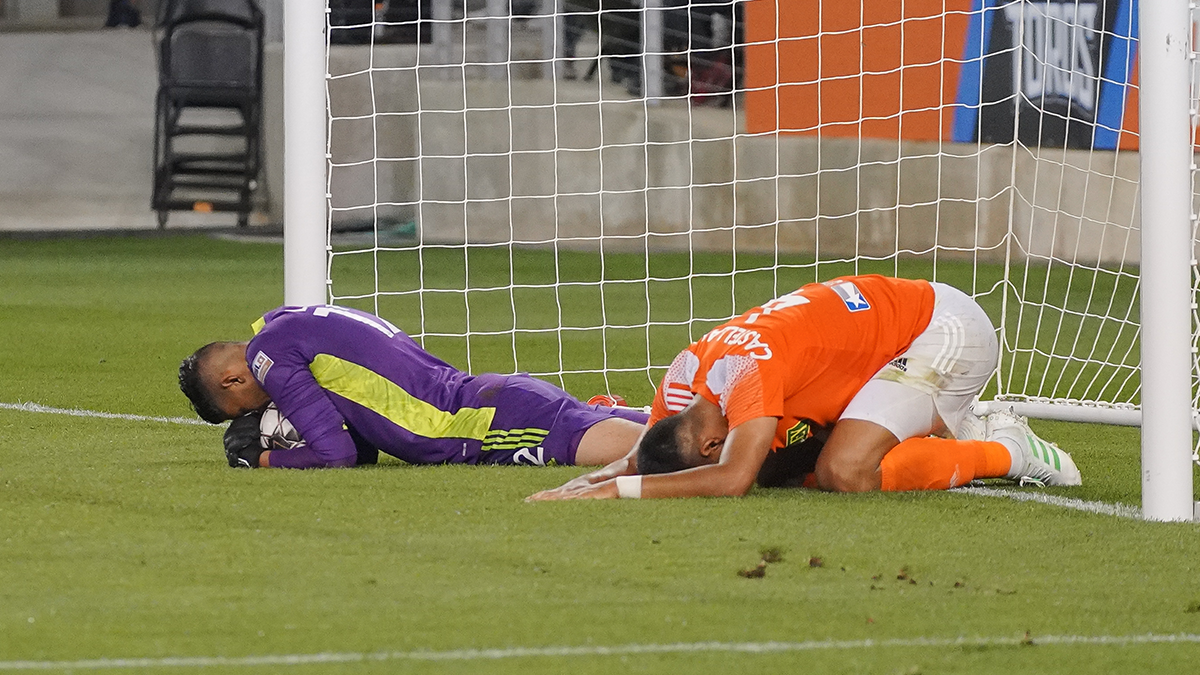 RGVFC began the match with an aggressive gameplan looking for an early lead.

At the second minute, Luka Prpa encountered a clear chance in front of goal after an accurate cross by Robert Coronado, but Luka‘s shot went way up high off Eric Lopez‘s goal.

Garrett McLaughlin had a great opportunity to score at the 3rd minute. Robert Coronado sends a long pass looking for the head of Luka Prpa. Prpa manages to get a touch towards McLaughlin and sends a volley that is parried away by Eric Lopez.

RGVFC continued to exert pressure on Los Dos and at the 6th minute, Robert Coronado sent a shot that unluckily hits the post, hits Lopez on his back, but the Galaxy keeper was able to grab the ball before the Toros could tap it in.

However, the Toros‘ luck turned for the worse at the 13th (how fitting) minute. After losing the ball in transition, RGVFC were left vulnerable in defense. Carlos Harvey sent a through ball to Kai Koreniuk, who dribbles the ball into the box ands slots the ball past Paul Blanchette.

It was all downhill from there for the Toros as the goal appeared to stun the team. LA Galaxy II, once again, capitalized on a bad giveaway by the Toros at the 29th minute. Cameron Dunbar dribbled the ball against Kyle Adams, who attempted to delay Dunbar. However, the Los Dos midfielder cut inside the box and struck a goal to the left back post, impossible for Blanchette to save.

At the beginning of the second half, the Toros had a deflected ball that apparently crossed the LA Galaxy II goal line, but the linesman waved the play on.

LA Galaxy smelled blood in the water and continued to capitalize on the Toros‘ errors. At the 53rd minute, Cameron Dunbar sends a through ball in between Robert Castellanos and Victor Garza towards Augustine Williams. Paul Blanchette attempted to intercept the ball, but was unable to make contact with it. Williams could not get a clear shot on goal, but was able to evade Victor Garza‘s slide for the tap in.

The night was still not over. At the 66th minute, Jonathan Perez sent a through ball towards Kai Koreniuk, who leaves Robert Castellanos behind with his speed. Koreniuk sends a low, driven shot past Blanchett towards the far post for his second goal of the game.

The Toros finally found their consolation goal in the 85th minute starting from an Isidro Martinez free kick. Juan Carlos Obregon gets a touch to it and Luka Prpa on the far post heads it in for the goal.

We had a set piece, I believe Chelo [Isidro Martinez] was on it and he kind of served it to the far post and I stayed near post hoping for a knock down. I can’t remember exactly who knocked it back across the goal, but fortunately I was there to finish it off.”

The excitement was short lived, however, as Mauricio Cuevas scores off a well hit free kick that Blanchett could not reach.

After the match, coach Gerson Echeverry expressed his frustration with the result, citing that the players’ lack of experience upon adverse results may have played a small factor in the scoreline.

We lost 5-1. I don’t think there’s much to be said. When we started the game, in which even Junior [Gonzalez] commented that he thought after the first five minutes we could have easily been up 4/5-0, but if you don’t score on them this is what happens when you constantly keep missing. The first two goals that they scored were out of our mistakes and then we panic as younger guys have a tendency to do it at times and that’s what happened with the result.

The RGVFC Toros travel next week to San Diego to take on Landon Donovan and his San Diego Loyal. Kickoff will be at 9:00pm CST and can be streamed via ESPN+.