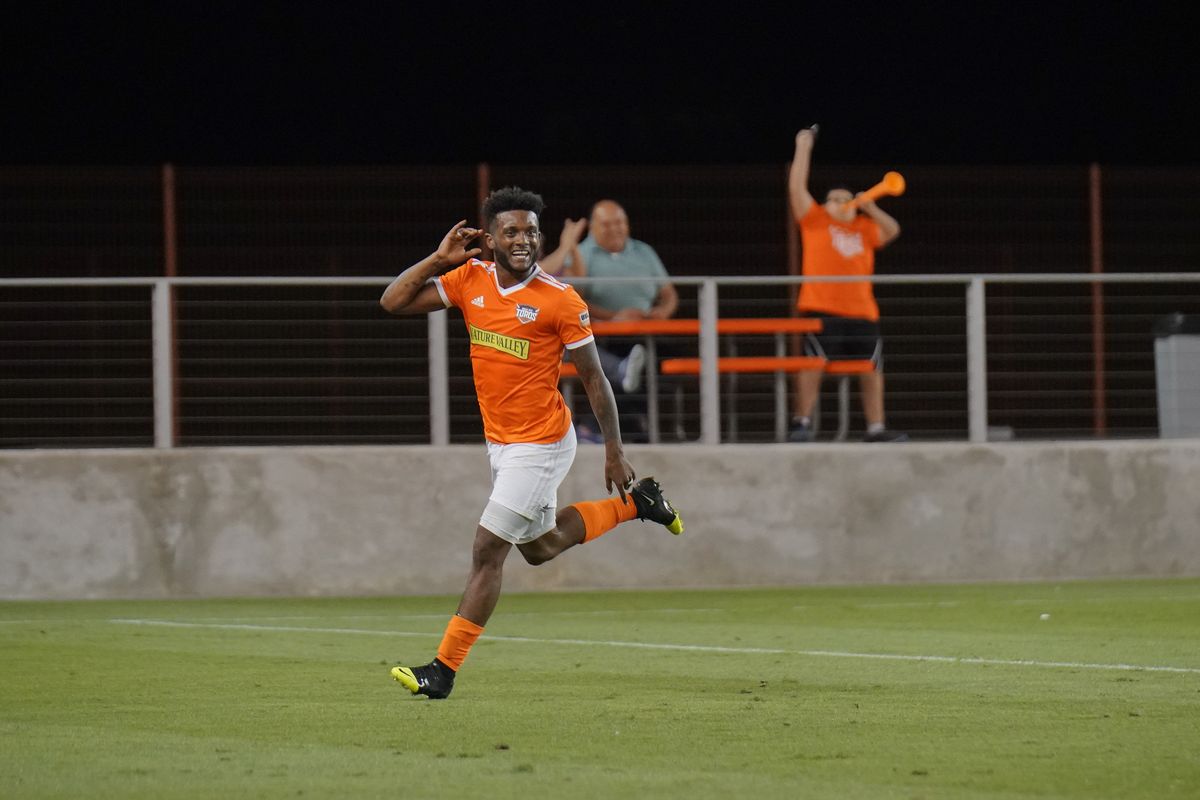 The Belizean forward scores a hat trick, but Los Dos salvage a draw in the last seconds of the match

Carson, CA – RGVFC was looking at a rough schedule coming into tonight’s match. After their 5-2 win over Las Vegas Lights on Saturday, the Toros would have to travel to Los Angeles to play against an explosive LA Galaxy II.

“Los Dos” has historically been a difficult team for RGVFC as they have never won a match against them in their history. This season looked promising as LA Galaxy II came to this match with an 11 day break after a 2-0 loss to San Antonio FC.

However, the Toros would have to rest some of their more explosive players tonight due to the quick turnaround between games. Coach Gerson Echeverry admitted after the Las Vegas match that balancing performance and fitness would be challenging.

“It’s extremely challenging. We have a bench, we might have to go to it. That could be a game that is, not only so much the quality, but also just the legs. I mean, if it gets to the point where you can’t get from point A to point B because you can’t cover the ground, that could be a problem.”

RGVFC struggled in the first half of the game, especially with LA Galaxy II‘s wingers. Neither Zach Jackson nor Robert Coronado could manage to stop the attacks of Armel-Don Tchilao or Diedie Traore.

It was in the 39th minute where “Los Dos” scored the opening goal in a play worthy of a Lionel Messi highlight reel. Diedie Traore receives a ball in his own half of the field and dribbles past 4 Toros defenders and slots the ball past Tyler Deric‘s near post.

The Toros looked more confident in the second half of the match with many opportunities to score the equalizer causing the momentum to shift in favor of the Toros.

Coach Echeverry knew he needed to bring out the big guns if he wanted to take advantage of the momentum shift. Michael Salazar, Maalique Foster, and Isidro Martinez were all subbed into the match looking to jumpstart the offense.

However, LA Galaxy II would find a second goal in the 74th minute in a counter attack after a Toros corner kick. Nate Schultz sends a long pass, which reaches Brian Iloski after a poorly calculated interception attempt by Robert Coronado.

With three “Los Dos” attackers in front of him, Tyler Deric charges towards the ball, but Iloski passes the ball to Kai Koreniuk, who just taps the ball into the net.

Not long after that, RGVFC would find a goal that would get them closer in the scoreboard in the 77th minute. Taking advantage of his speed, Maalique Foster barges from the wing into the box and passes the ball to Michael Salazar, who sends the ball into the net.

In the 79th minute, RGVFC would find the equalizer. Robert Coronado takes advantage of a slip by Nate Schultz to dribble the ball in the left wing. He then sends a low, driven cross towards Michael Salazar and the Belizean sends the ball into the net again.

The Toros would lead for the first time in the game in the 83rd minute. Jesus Enriquez receives the ball inside the box after a clearance by the “Los Dos” defense.

Enriquez then dribbles towards the end line and sends a cross that Abraham Romero manages to touch, but the ball lands in the feet of Carlos Small for the tap in.

In the 86th minute, RGVFC, with 10 men on the field due to a Zach Jackson injury, concede a goal scored by Nicholas DePuy. DePuy was left unmarked in the box and heads the ball to give the Galaxy II the partial equalizer.

Then in the 90th minute, RGVFC find another goal by Michael Salazar to complete his hat trick of the night. Jesus Enriquez sends a chipped cross to Conor Donovan, who manages to get a touch on the ball before Abraham Romero and Michael Salazar slides for the ball sending it in the net.

The table was set for an RGVFC win on the road and the end of the drought against LA Galaxy II, but “Los Dos” had other plans.

In the 95th minute, Justin Fiddes receives a clearance by Conor Donovan outside the box and sends a hard driven shot that Tyler Deric saves, but the rebound lands in the feet of Kai Koreniuk, who finishes the tap in to secure the point at home.

In the end, despite the heroics, RGVFC had to settle for a heartbreaking draw at Dignity Health Sports Park. They now have 6 days to prepare for another away match next Tuesday, this time against 1st placed Portland Timbers 2.

Edson Ochoa is the host of the Down in the Valley podcast. You can watch the show live every Wednesday at 7pm at youtube.com/downinthevalley.