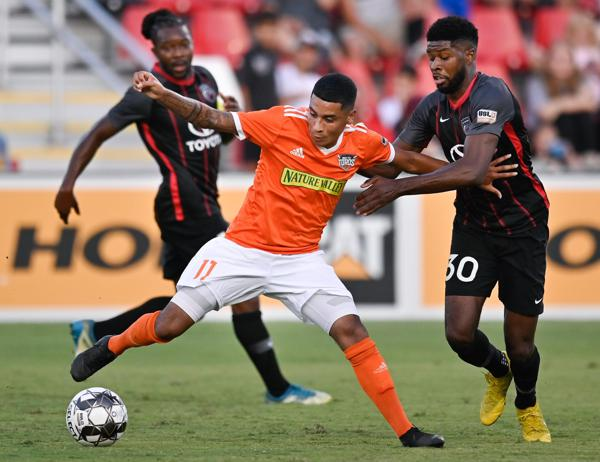 Alejandro Fuenmayor’s red card in the 31st minute put the Toros up against the wall, but second half heroics from the team earned them a point in San Antonio

San Antonio, TX – RGVFC stunned Toyota Field tonight after coming back from a 2-0 deficit at halftime with 10 men.

In true South Texas Derby fashion, both teams fought hard and exerted high pressure on each other looking to create a mistake and create chances on goal.

However, it was San Antonio FC who struck first in the 14th minute. Moises Hernandez finds Jack Barmby unmarked at the top of the box, and crosses the ball back to him. Barmby sends a first time shot that slots at the base of the far post, impossible for Nico Corti to save.

After the goal, RGVFC looked very disoriented on the pitch with the team trying to send long passes to Michael Salazar hoping that the Belizean could outmuscle the San Antonio defense.

But the game seemed to go much worse for Gerson Echeverry‘s team. In the 31st minute, Alejandro Fuenmayor loses the ball at the top of the box to Frank Lopez, giving him a clear path towards goal. In an attempt to stop the play, Fuenmayor continuously pulls on Frank Lopez, causing him to fall, but the referee waved play on.

Due to this egregious error, Frank Lopez makes an obscene gesture to the referee, causing him to stop the play and show a red card to the Cuban striker.

However, upon being notified by his linesman about his mistake, the referee calls the foul, nullifies the red for Lopez, and sends Alejandro Fuenmayor straight to the showers.

In the 44th minute, Walter Restrepo sends a cross back towards an unmarked Cristian Parano, who sends a first timed, chipped shot that goes over Nico Corti and into the goal.

In the second half, RGVFC entered the game a lot more composed with some tactical adjustments to choke the San Antonio FC attack.

“We came out at halftime, we said no excuses,” mentioned coach Gerson Echeverry. “If we whine, moan, nothing’s gonna get done. We made a couple of adjustments defensively. We wanted to make sure that we didn’t concede goals in the first 10 to 15 minutes.”

With Conor Donovan in the back, the defensive line showed better organization and did not allow Frank Lopez to be able to create damage on Nico Corti‘s goal.

“I thought our centerbacks referenced him really well, starting with Alejandro (Fuenmayor) and (Robert) Castellanos and then later with Conor (Donovan),” Echeverry commented. “We knew that he likes to get behind, he’s extremely powerful, and we wanted to know where he was at all times. I thought the guys were very sharp and very focused, knowing where he was at all times and, fortunately, we were able to slow him down.”

The turning point for the Toros came in the 70th minute, with the substitution of Carlos Small for Michael Salazar. Small brought the team a second wind with his ability to exert pressure on the San Antonio defense.

The plan worked for Gerson Echeverry. In the 75th minute, Carlos Small knocks in a header from an Isidro Martinez corner kick to give the Toros hope of a comeback.

“He (Carlos Small) brought a certain different level of energy. He’s so strong and powerful, and when he wants to run and press and make things happen, he is a handful.”

As Gerson Echeverry perfectly described it, the Toros “smelled blood in the air.” The team continued to create pressure on the San Antonio defense looking for the equalizer.

Five minutes later, the equalizer came on an unfortunate own goal by Ebenezer Ackon.

Eric Bird sends a through ball to Carlos Small but Ebenezer Ackon makes a timely slide tackle to dispossess the panamanian striker. To his bad luck, the ball slides past Matt Cardone and into the goal.

In the end, RGVFC salvaged a point on the road against their bitter rivals and potentially ruined San Antonio‘s chances to win Copa Tejas. For Gerson Echeverry, this result is a sign to the team and to the fans that this team never quits, even when the odds are against them.

“Getting a point on the road anywhere is extremely difficult, especially for us that we’re not very good on the road, and to do it a man down, I’m extremely, extremely proud of these guys.”

While the whole defensive line played well in the derby, Robert Coronado shined with a total of five tackles, two clearances and five interceptions.

The Toros host El Paso Locomotive next Saturday at 7:30pm at H-E-B Park in another crucial Copa Tejas match. Tickets are $5 and all proceeds will benefit El Paso victims.